Erin Blaskie’s, Destiny: A Love Story About a Video Game, Marketing & Storytelling, is a tale of distilled 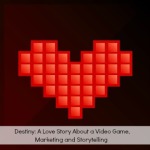 brilliance. It’s a short, to the point, true story of the video game, Destiny, the brainchild of developers Bungie and Activision.

Erin shares their story over the years – how they authentically unrolled, unveiled and finally launched the game 5 years later – and to the acclaim of being the biggest and most successful launch in video game history.

How did they do it? By engaging their market through storytelling – but in a particular way – couched in authenticity and transparency. Through a well-thought out and brilliantly executed marketing initiative, they followed a process that allowed them to touch, engage, and involve their followers who then continued to spread the anticipation and excitement all the way to launch.

A short, easy-to-read, thought provoking book, Blaskie uncovers basic principles of marketing, brand building, and community, constructed in a way that engages followers over time – an adventure as such. It’s sure to upend your typical marketing ideas and start you thinking in a new direction. And what’s even better is that you’ll remember these principles because it’s told as a story! A highly recommended read.

Click the link below to book a 20-minute consultation. We'll send you a brief form to complete prior to the call! Talk soon!

Coaching for the New Millennium

Today's corporate executives and business leaders are turning to coaches to help them win their game -- personally and professionally.

From clarifying goals and designing performance strategies, to creating structures for measurement and accountability, the collaboration of client and coach creates the opportunity for unprecedented possibility.

Coaching is here to stay. Working with a coach is essential to success. The finest athletes in the world have coaches -- why not you?

Whether you’re a corporate CEO, the owner of a small business, or a stay-at-home mother, you can benefit from the focus, clarity, framework and accountability that a coaching relationship offers.

For those who want to excel at every part of life and who want to enjoy it to it’s fullest, partnering to achieve results will accelerate your progress. Find out how coaching can be the catalyst to take you to the next level in all aspects of your life.

If you're ready to start the journey, schedule an appointment below and let's chat.

The content of this site is copyrighted © by Tara Kachaturoff. All rights reserved in all media.